One year after the VMX Kickstarter

TL;DR Last year’s Kickstarter campaign did not give us the $100k we were looking for, so we built VMX anyways. We launched our own tiny online store. You can buy a standalone “no internet connection required” version of our VMX object recognition server today.

People launch Kickstarter campaigns for all sorts of reasons. Some people have a cool product prototype and need resources for the first major production run. Sometimes personal expression is the driving force. Yet, in other cases, a company appears to be already VC-backed, even doing quite well, and Kickstarter is used solely for promotional/marketing purposes. Whatever you’re looking to get out of a Kickstarter campaign, launching and supporting a campaign is a great experience and I recommend it to most fledgling entrepreneurs. Creating an advertisement for your idea and babysitting a campaign is an excellent way to get an idea out of your head and into a tangible form. Allow me to share our very own vision.ai Kickstarter story.

The VMX Kickstarter and the beginning of vision.ai

With a killer object recognition software prototype, the goal of revolutionizing the way people build computer vision applications, and seemingly unbounded optimism, we launched the “VMX: Computer Vision for Everyone” campaign on December 20th, 2013, exactly one year ago. At that time, we envisioned that $100K would be enough to support the two technical co-founders (Tom and Geoff) working on VMX full-time, but towards the end of January it was pretty clear that we weren’t going to reach our funding goal. Kickstarter is all-or-nothing, so even though we got up to $41K, we were going to have to part with $0 and a temporary feeling of defeat.

What we did wrong

Our Kickstarter video (about 7 minutes) was way too long – we focused too much on what VMX was at the time and not what it was going to be. Secondly, we didn’t have enough people helping out with the campaign. I guess now I know why companies have marketing departments. Finally, our reward structure was too complex. We had a multi-tiered credit system for our rewards and it worked against us. We should have kept it much simpler.

One thing we learned from our Kickstarter campaign is that folks weren’t happy with VMX being delivered solely as a web-based service. What happens if we go bankrupt? What happens if we start charging 10x? What happens if we get acquired and the acquirer decides to can our service? Good questions. Our solution was to add a standalone version of VMX for download, but this was added mid-campaign and we didn’t have the resources to drastically change our campaign to reflect this new functionality. For more details, see the mid-campaign Local VMX Install blog post.

What we did right

It is quite common for successful campaigns to be very late on delivering the rewards or completely fail to produce anything “rewardable.” My hypothesis is that when founders use their freshly acquired funds to outsource some key component of their project, everybody suffers.

We didn’t get any money from Kickstarer, but we continued working on VMX. Having a very limited budget and no outside support, we had only one option: to be clever. Our strength is that we have strong software engineering backgrounds, and our initial product being software-based, it was quite possible to pull it off with no outside support. It’s impossible to know where our software would be today if we had gotten the Kickstarter money. But not getting the funds forced us to be clever, economical, and focus on our strengths. So let’s fast forward to today.

How to get VMX 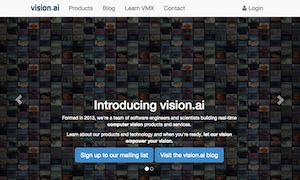 VMX is available for download directly through our vision.ai website. Our software is still in beta, a standalone “no internet connection required” software license costs $100 for individuals, we offer a commercial version of our software, and we are eagerly looking forward to getting our newest features out the door. By purchasing a license today, you get access to our stable build, our development build, as well as future updates we will be releasing in the upcoming year. We continue to be a bootstrapped tech company, currently operating out of two small offices located in Boston, MA and Burlington, VT.

Geoff and I will be doing more touring this year, showing off VMX to our colleagues, friends, and potential investors. We will be visiting Hackerspaces, Universities, Hackathons, and Meetups.